The Music Plays On — Schubert Lieder

This will be the first of probably many blog posts on this subject since, first and foremost, Schubert wrote over 600 secular songs, and every one of them could be individually discussed in great detail. Also, there have been many singers, each one deserving a retrospective, who have made it part of their life work to specialize in singing these very special pieces.

The primary reason I decided to study conducting at the University of Illinois at Champaign-Urbana was to work with Donald Schleicher, an excellent teacher of conducting. However, the second reason was to be a fly on the wall of the great accompanist, John Wustman. He had visited my hometown of Reno, Nevada, to give a masterclass and he was the first person to reveal why I had such a fascination with Schubert’s songs. I wasn’t much of a singer, although I sang in chorus, and I wasn’t much of a pianist, although it is my first instrument and a tool I use to study scores. My main instrument was the French horn. However, I had a love for Schubert’s songs since high school and I think Mr. Wustman was rather bemused by my extensive knowledge, if I do say so myself, on something for which I had no vested interest as a student, per se. 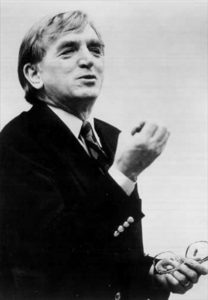 I audited Mr. Wustman’s Schubert Class for my entire first year. I watched my fellow students, singers and pianists, go through dozens of songs. We explored any and all meanings – and double-meanings — of every word, studied the myths that were referenced, ruminated on all emotional and philosophical content. It remains the most musical and intellectual class that I have ever taken and I learned more about music making than the majority of time I have spent making music. Here’s a wonderful example of his teaching:

Here are some of Schubert’s Lieder I remember exploring during that glorious year with Mr. Wustman. I ended up being his page-turner for most of the class….I’ll never forget his “click, click” whenever he played Der Einsame….