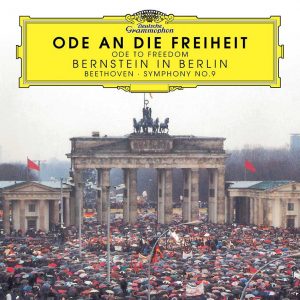 For today I’d like to focus on a performance that was probably the last time Beethoven’s music reached a global audience, joining a joyous moment that had been completely unforeseen by all of the political leaders at the time. When the Berlin Wall was breached and began to be demolished on November 9, 1989, Leonard Bernstein lept into action. Bringing together musicians from the Bavarian Radio Symphony Orchestra, Dresden Staatskapelle, Leningrad Philharmonic, London Symphony Orchestra, New York Philharmonic, and Orchestre de Paris as well as the Bavarian Radio Chorus, members of the Radio Chorus of what had been East Berlin, and the Children’s Choir of the Dresden Philharmonie, and the soloists June Anderson, Sarah Walker, Klaus König, and Jan-Hendrik Rootering, Bernstein created an ensemble worthy of the momentous event.

Bernstein, who had been a lifelong advocate for freedom, took the liberty of changing the Schiller text from “Freude” to “Freiheit.” He said at the time, smiling, “I’m sure that Beethoven would have given us his blessing.”

On Christmas Eve, 1989, there was a performance in West Berlin at the Berlin Philharmonie (the home of the Berlin Philharmonic), but it was the performance on Christmas Day in East Berlin’s Schauspielhaus, now the Konzerthaus, that was broadcast to the world. Over 100 million people (myself included) watched this incredible event, many never having seen live pictures of East Berlin. I personally will never forget the excitement I felt while watching this concert.