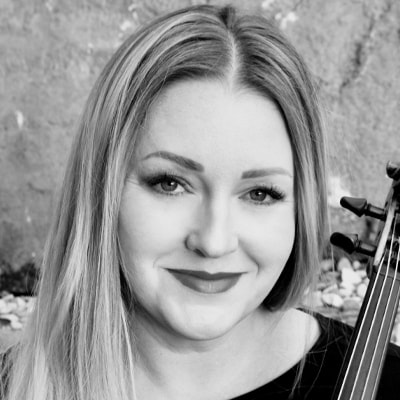 Melanie Schiemer began studying music at Nevada School of the Arts with Mary Straub in 1984. Over the next several years, Schiemer attended private and group classes at NSA and also participated in numerous Suzuki Institutes in the United States. During her time at NSA, Schiemer successfully competed in local and state competitions. In 1996, Schiemer was awarded a full fellowship to the National Symphony Orchestra Summer Institute in Washington, D.C. After graduating early from the Las Vegas Academy in 1997, Schiemer continued her music training by attending the University of Nevada, Las Vegas. In the summer of 1999, Schiemer was made a member of the Amadeus Chamber Symphony in London. The group embarked on a European tour while featuring soloists such as Steven Iserlis. During the same year, Schiemer became a member of the Las Vegas Philharmonic and now holds a tenure position in the orchestra. Schiemer has furthered her performing career as a free lance musician. She has performed and/or recorded with such artists as Palcido Domingo, Luciano Pavarotti, Andrea Bocelli, Vanessa Williams, Pen and Teller, and Clint Holmes. In January 2007, Schiemer was made a full time member of the Las Vegas production of The Producers playing at the Paris Las Vegas Hotel.

Soon after joining the Philharmonic, Schiemer began her Suzuki Teacher Training. She has completed training units 1A through 5 (six total) as well as several enrichment courses. Currently, Schiemer is continuing her training by further enrolling in Suzuki Training Certification courses as well as studying child psychology and early childhood development at the University of Nevada, Las Vegas. Schiemer was as a full time teacher for the Nevada School of the Arts for over nine years and still resides as a faculty member for the annual Nevada School of the Arts’ Suzuki Institute. Melanie Schiemer participated in the creation and implementation of successful Suzuki programs at both Sunrise Acres Elementary and The Meadows School. As an extension of the program started at Sunrise Acres Elementary, Schiemer created a Suzuki Outreach Program at the Nevada School of the Arts. The program enriches the community by affording inner city youth the opportunity to study music in the Suzuki Violin Program. Beginning in the fall of 2007 Schiemer launched a full Musikgarten and Kindergarten Music program at the Midbar Kodesh Temple and Early Childhood Development Center. In the Fall of 2008, she will join The Meadows School Faculty as the Kindergarten music teacher. The Suzuki Strings at The Meadows School continues to grow and the 2008-2009 school year is expected to be the biggest year to date.

In addition to teaching and performing, Schiemer is a member of several organizations including the Music Teachers National Association (MTNA), Las Vegas Music Teachers Association (LVMTA), Suzuki Associations of the Americas (SAA), and Early Childhood Music and Movement Association (ECMMA). For the LVMTA, Schiemer has served as the String Coordinator and has functioned as the American Federation of Music Junior Festival String Competition Chairperson. Schiemer has also successfully applied for her Level 2 certification with the ECMMA. In 2006, Schiemer has received her Musik Garten TM Qualifications and License. Most recently, Schiemer completed her level 1 Orff certification due to the generous support of The Meadows School.